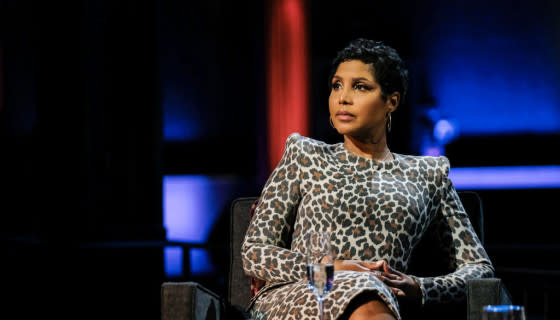 Toni Braxton is no stranger to eating the girls up and leaving no crumbs. From her killer bod to her buzz cut and other dos, Ms. Braxton is a whole mood. The iconic singer gave us a moment in a see-through cut-out Black top and highwaist satin shorts, while showing off her flexibility at 53-years young.

Perched atop a piano, Toni lifts up her leg before pointing it straight to the sky in a perfect line. All while rocking Louboutin heels, a short blonde cut and sexy Prada turtleneck.

Toni is no stranger to a casual slay. She often reminds fans what she’s working with with social media clips that show off her natural body.

It was recently announced Toni Braxton’s sixth album, Libra, will be released to all streaming services and re-released with a vinyl and CD format. Toni also appeared on Jam & Lewis’ debut album, Jam & Lewis, Vol. 1, on the track “Happily Unhappy,” RatedRnB reports.

Toni isn’t the only celeb to rock a bold short cut this summer. She joins the list of Willow Smith, Jada Pinkett Smith and Gabrielle Union. Toni isn’t the only one in her house making headlines for their hair. Her son Diezel went viral after posting a picture of his natural hair.

Good genes run in the family!