Three content creators on the significance, meaning of Pride makeup 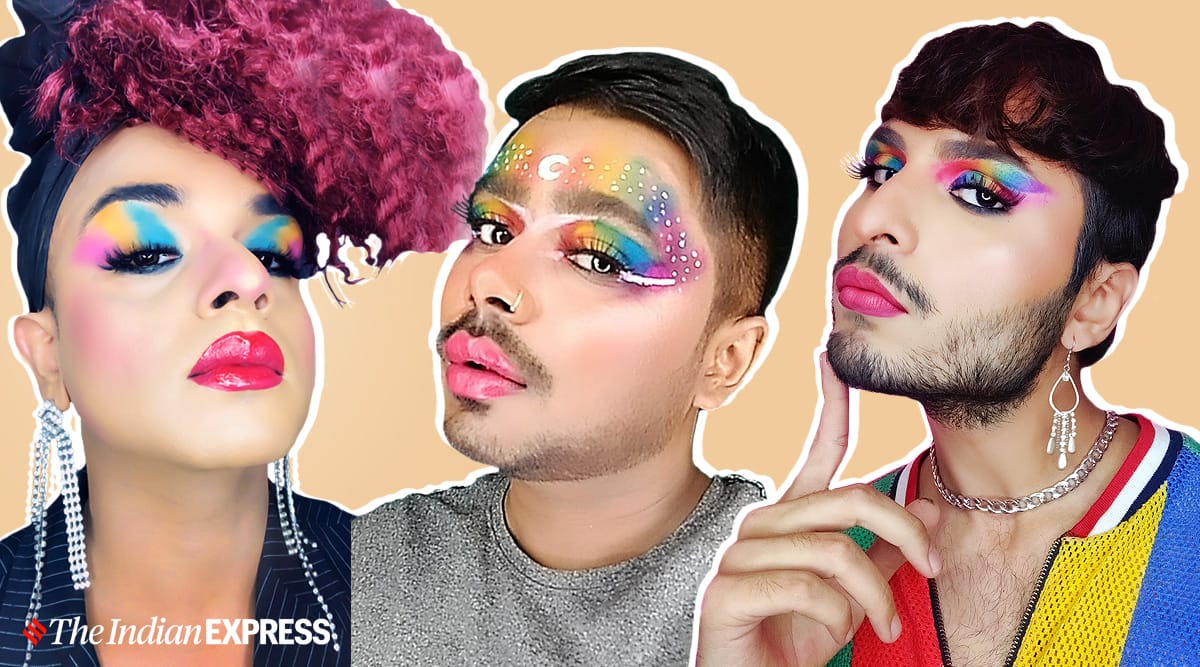 A splash of colour, some glitter, a popping rainbow — Pride makeup is all this and much more. For years, members of the LGBTQ+ community, their allies and makeup lovers have worn it to make a flamboyant and flourishing social statement on inclusion and representation. With time, Pride makeup became such a hit that there began to exist makeup ideas, pages, tips, et al, on how to ace the look.

Around the world, Pride makeup and Pride looks are commemorated. So, with Pride Month being celebrated in June, indianexpress.com reached out to three content creators on Trell, a lifestyle video and shopping app, to understand what steers them towards this form of art, if they do it to express a certain viewpoint and its significance in their life.

For Ayush Rajani, an LGBTQ creator on the app, Pride makeup is all about self-expression. “[It is about] how I feel when I play with makeup and the way I feel about myself when I am in makeup. It gives me the confidence to show the world that makeup is not only for women. It is a cosmetic product that can be worn by anyone, irrespective of any gender. I relate myself and my makeup to an artist who uses paint on his canvas to create art,” he tells this outlet.

Rajani, 24, who hails from Indore, Madhya Pradesh and works as a makeup artist, identifies as a gay man. “I was 18 when I found out Pride Month existed. Since then, it has been extremely important to me. It gave me a feeling of acceptance, re-invented my experience as a human being and gave me the confidence that there are many others like me and I can be happy, too.”

To him, Pride makeup is everything “over the top, colourful, filled with lots of glitters, shimmer and shine”.

Just like him, Jeet Nayak from Kolkata also says that makeup means everything to him, and it makes him “feel happy”, as though he has found his “creativity” through it. The 21-year-old identifies as gay and works as a makeup artist in the city. “Pride Month is important for me because together we can create a brighter and joyful world. [Pride makeup] is full of colours. I have created so many looks, like the ‘rainbow pride look’, ‘transgender flag makeup’, ‘gay men pride flag makeup’ etc.”

Prashant — who identifies as gay and lives in Bengaluru — tells indianexpress.com that he discovered his “love for makeup two years ago”. “I realised this is how I like to express myself. My makeup also helped me give birth to my Drag persona, Bahaar.”

He says that while he likes to “celebrate Pride” every day of his life, “it is nice to have a month dedicated to the community, to educate people and spread awareness”. For him, Pride makeup is synonymous with “colourful makeup or glittery makeup”, because “most people understand that of Pride makeup. And in a way, it is true because what we truly represent in Pride makeup is our flag, which is a rainbow.”

While Prashant likes to experiment with glitter outfits more than makeup, he does love to “doll-up”. “So, if you open my closet you will see all sorts of blings. I think I have a glitter dress in every colour. My makeup is bold because I like to make a statement. I like to draw my eyes dramatically and play with eye-shadow colours,” he explains.

For Rajani, his looks involve “experimenting with the rainbow colours on my face, transgender Pride flag colours, and bisexual Pride flag colours. Every colour out there becomes a part of the look and that is the best part about it.”

While India took a bold stand against Section 377 almost three years ago, homophobia in the country continues to exist. So while there is a lot of education, understanding, love and acceptance, there is also considerable trolling. How do these creators deal with it?

Nayak says he ignores all the hatred that comes his way, because “haters gonna hate”. “There are also some positive comments, which inspire me and make me happy, encouraging me to do lots of new makeup looks.”

“My makeup helped me give birth to my Drag persona, Bahaar,” says Prashant

Rajani shares that he receives a lot of hate. “On Facebook, I had once received over 2,000 to 3,000 hate comments on one of my reels. Initially, it bothered me, but then I realised all of it was coming my way because I was doing something that society wasn’t comfortable with. [But] I feel blessed to receive positive comments, too. On social media, people are educated enough and are aware of the community — what it means to be gay and that it is all right to wear makeup. This is what gets me going and fills me with joy,” he tells this outlet.

Prashant explains that watching him do makeup probably gives “courage to some young gay boy sitting at home and crying every night, fighting their sexuality”. “It also educates straight people that we are also just people. Me interacting with my audience through a video sends a message to a homophobe, who may suddenly realise gays are not bad, so hating them is futile.”

Rajani says people have now started to understand that makeup is gender-neutral, and Nayak expertly sums it up in the words of English writer Edward Bulwer-Lytton: ‘The pen is mightier than the sword’. “Just like that, for an artist, a makeup brush is mightier than hate. It is powerful and I see the difference.”