Guys Are Wearing Nail Polish and We’re Here for It 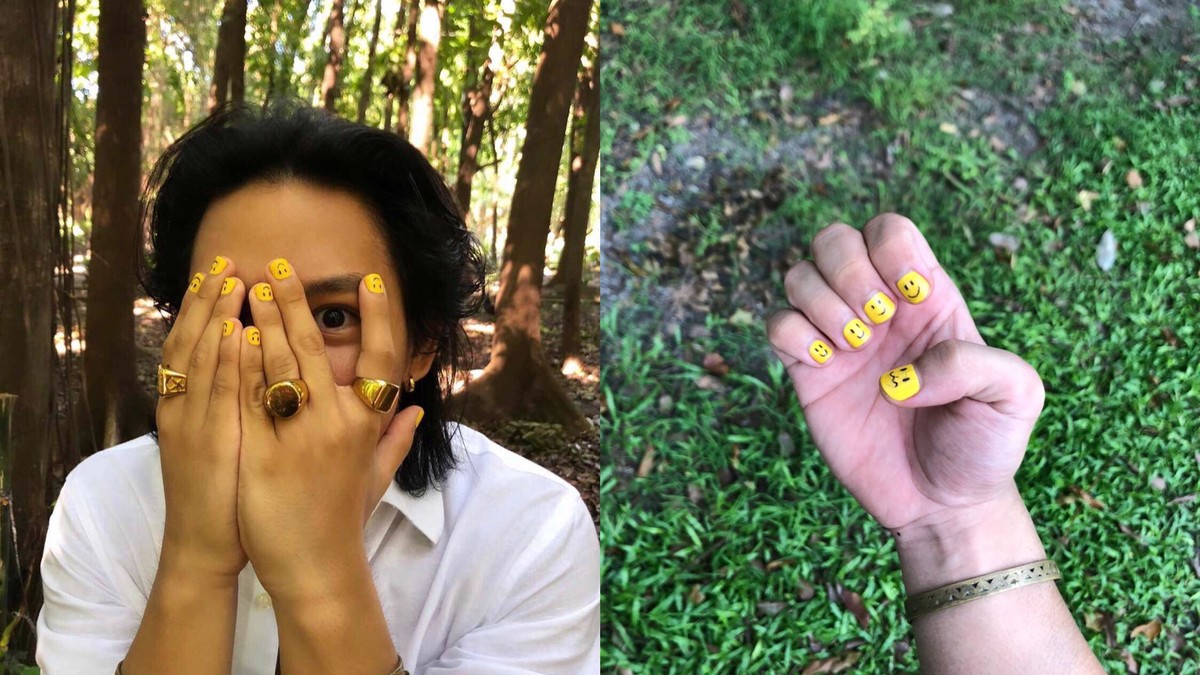 VICE WRITER ROMANO SANTOS WENT TO A NAIL SALON TO GET YELLOW POLISH, THEN ASKED A FRIEND TO DRAW SMILEY FACES OVER IT WITH A MARKER. Collage: VICE / Images: Courtesy of Romano Santos

First came the baguette bags, then the low-rise jeans. Now Gen Z is bringing back yet another early 2000s trend—nail art. This time though, it’s not just women painting their nails.

Man-icures have made their way from non-conformist stars like David Bowie to mainstream celebrity red carpet looks. With TikTok on one hand and quarantine boredom on the other, men around the world are doing it, too.

“The rappers that I listen to who sing about guns, cars, and women are now into non-stereotypical things such as painting their nails,” Ija Imson, a 26-year-old sports trader from the Philippines, told VICE.

Imson started painting his nails around the time the pandemic started, inspired by a photo of A$AP Rocky, where the rapper had eye designs on his nails.

The trend is popular among Asian artists as well.

“I was inspired by a Korean artist, DPR IAN,” said Raymond How, a 24-year-old student from Singapore. “[He] painted his nails for one of his album cover shoots.”

Other guys dipped their hands in the trend because of TikTok, where fashionable guys like Vinnie Hacker regularly rock nail polish.

Videos on the platform with the hashtag #guyswithnailpolish now have a total of around 1.5 million views, while those with #boyswithnailpolish have been viewed around 1 million times.

While the early to mid-2000s saw many emo kids painting their nails black, the trend is more mainstream—and more colorful—now. For many of these men, wearing nail polish is a way to express themselves beyond stereotypes of masculinity. It’s a strong statement in Asia, where many countries still hold traditional views on gender, besides the fact that Western beauty standards have historically stereotyped Asian men as effeminate.

“I think that if you were to experiment with accessories that inherently make you a little bit more feminine, I could see why, perhaps, some Asian men might stray away from that,” 27-year-old Nicholas Millado, a Filipino American model based in Chicago, told VICE. “I feel like a lot of times, Asian men already have more to overcome than the average guy in terms of presenting as traditionally masculine.”

It’s an especially difficult balance for Millado. As a gay man, he was initially hesitant about painting his nails, thinking that it would play into stereotypes, but seeing more men wearing nail polish, regardless of their sexuality, made him more comfortable with finally getting creative with his nails.

“I think that there still is that stereotype that painted nails [are] an indicator that somebody is gay,” he said. “I was a little bit hesitant, thinking maybe painting my nails is too loud of a way to express myself, but I think that people are realizing that it’s less and less the case.”

Blurring the line between straight and gay men is exactly the point, said Alex Diaz, a 26-year-old actor from the Philippines.

“People are warming up to the idea that traditional masculinity is oftentimes toxic and… embracing your feminine side gives you that balance,” Diaz told VICE.

It’s also a matter of style and changing beauty trends.

“It’s definitely sexy,” Diaz said. “But it’s not about being sexy for me. It’s about making my nails match the shirt that I’m wearing that night.”

The men VICE spoke with said that reactions to their nail polish looks vary from subtle inquisitive looks to outright exclamations of approval or disapproval, but they say they generally don’t care what other people think.

Thng Kai Xiang, a 23-year-old student in Singapore, said having painted nails has mostly been a positive experience, even though he occasionally hears strangers in public make snide comments about it.

“When I’m in school, everyone’s very accepting of me. Maybe outside… we’ll get stares here and there, but nothing major,” he said.

Thng is now challenging the boundaries of nail art with his friend who owns a home-based nail salon.

“I think I [am] also a person [who] really [likes] to experiment with fashion and stuff. So I think the nails… complemented my style,” he said.

He now sees manicures as a “treat yourself” experience. It’s the same for Imson, who goes to a professional manicurist once a month or when there’s an upcoming special occasion.

IJA IMSON LIKES HIS NAILS MORE WHEN THEY’RE DONE AT A NAIL SALON THAN WHEN HE DOES THEM HIMSELF. Collage: VICE / Images: Courtesy of Ija Imson

“Getting my nails done by someone else felt therapeutic,” he said. “I felt pampered throughout the whole experience, and the final product was a beauty.”

For these men, painting their nails is a way to feel pampered and beautiful, and to challenge stereotypes, all at the same time.

“I give major props to everyone who puts themself out there and goes against stereotypes,” Imson said. “Admittedly, I was also conscious at first, but I’ve grown to love painting my nails, and I hope that more people give it a chance.”

Koh Ewe contributed to the reporting of the story.